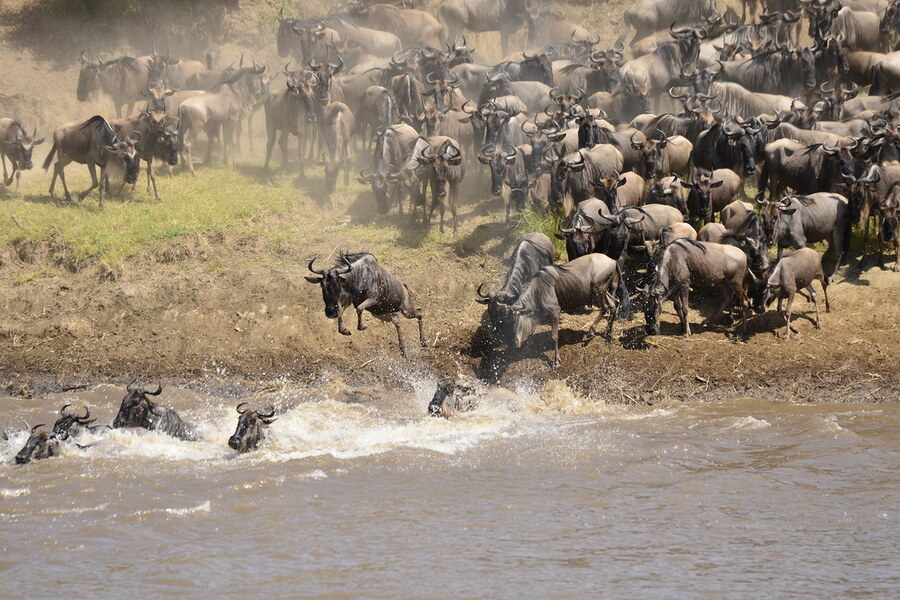 This is from July, August to September, the Mara River in northern Serengeti affords the most dramatic river crossings. Fierce and deep, cliff-sided and rain-swollen, the river takes an enormous toll of the exhausted and terrified wild cattle that surge through its torrential flow

From the Lamai Wedge Triangle, at the extreme northern end of the Serengeti National Park, privileged observers can overlook the climax of the mass migration whilst they enjoy the newly conceded comforts of safari travel in Africa, eco-luxury tourism, away from the eager crowds of onlookers clustered on the Masai Mara National Reserve expanse of the Kenyan border of the Serengeti-Masai Mara ecosystem. From July, August to September, the Mara River in northern Serengeti affords the most dramatic river crossings. Fierce and deep, cliff-sided and rain-swollen, the river takes an enormous toll of the exhausted and terrified wild cattle that surge through its torrential flow, some drowning helplessly, foundering in narrow defiles, floundering in mud, falling victim to crocodile, staggering, exhausted to dry land and often, in confusion, returning to the same scene of their ordeal allowing the cycle to repeat itself

On a Serengeti North Mara River Safari with Mkama Tours to Tanzania this raw, moving farce-cum-tragedy cannot fail to rivet itself in memory as the theatre of Africa; the ungainly animals demonstrate their strength and courage, each an expendable unit of a single wildebeest herd entity determined to survive. Within a landscape defined by starkly rising hills of the western escarpment beyond the golden plains, the struggle continues as the slightly depleted migration herd staggers onward, still trailed by hundreds of hopeful predators. In this untouched wilderness, there are year-round delights; memorable concentrations of big game, portly hippopotamus and grinning crocodile. It is the season of cheetahs, leopards and lionesses with their young cubs. Numerous small mammals hide in the reverie woodlands. Climbing hyrax, mongoose and nocturnal bush babies inhabit the fig trees. The Wedge Triangle is also a wonderland of avian treasures to be seen during your birding tour of Tanzania. Vultures and eagles soar above the escarpment, red-headed weaver birds hang their nests from acacia branches on the veld and Technicolor gems of lovebirds and rollers flash in blinding sunlight between showers.

Pick up from Arusha and transfer to the Ngorongoro Conservation area. We arrive in time for lunch at the lodge and after lunch we will descend over 600 meters into the crater to view wildlife for an afternoon safari tour.

Supported by a year round water supply and fodder, the Ngorongoro National Park supports a vast variety of animals, which include herds of wildebeest, zebra, buffalo, eland, warthog, hippo, and giant African elephants. Another big draw card to this picturesque national park, is it’s dense population of predators, which include lions, hyenas, jackals, cheetahs and the ever-elusive leopard, which sometimes requires a trained eye to spot. We will visit Lake Magadi, a large but shallow alkaline lake in the south western corner, which is one of the main features of the crater. A large number of flamingos, hippos and other water birds can usually been seen here.

We arrive in time for lunch and enjoy an afternoon game drive in the Serengeti National Park.

After breakfast, enjoy a full day game drive in the Serengeti National Park. The area around Lobo and the Grumeti River has good resident game throughout the year. Non-migrating game like elephant, buffalo, gazelle, zebra, lion, leopard and cheetah can be seen here all year round. The game viewing is very good and you can follow game for long periods without seeing other vehicles – truly one of the forgotten corners of the Serengeti Plains. Magnificent riverine trees can be found along the river lines and bird life such as kingfishers and fish eagles can be found here.

After breakfast we head towards the far northern reaches of the Serengeti National Park, also known as the Wagakuria. We will do a game drive en-route from the Lobo area to the Wagakuria area. As we head north, good sightings of giraffe, plain game, herds of buffalo and elephants can often be seen.

We arrive in time for lunch at the lodge and after lunch will we enjoy an afternoon game drive in the area. The wildebeest migration can normally be found in the Wagakuria area from August to October, depending on rainfall patterns. A long stretch of the Mara River runs through the northern Serengeti National Park and the Mara River provides the migration with its most difficult obstacle. Witnessing the frantic herds of wildebeest crossing the Mara River is amazing.

After breakfast enjoy a full day game drive in the Wagakuria area. Resident wildlife numbers are exceptionally high in the Wagakuria area, with prides of lion up to 30 strong, however from August to October the area turns into a wildlife paradise. The key feature is the Mara River and it is not uncommon to see the herds cross the Mara River north on one day and then back south a few days later. Please take note – to actually finding a crossing is very difficult and is sometimes a matter of luck. A herd can be seen next to river and only decide to cross or not cross until a couple of days later. This area is a stunning region with kopjes, woodland, riverine vegetation and open plains, similar to Kenya’s Masai Mara Game Reserve.

After breakfast at the lodge, we depart to the Kogatende airstrip and enjoy a game drive en-route to the airstrip. The group should tip the guide around $20 to $ 30 a day

Around mid-morning, join a scheduled flight from Kogatende airstrip to Arusha airport. Upon arrival to Arusha airport, meet our driver and transfer to Arusha town. On arrival in Arusha will we have lunch and then we will end our African safari adventure. You will be taken to your hotel, which ends our safari services.