Tanzania’s Serengeti National Park and Ngorongoro Crater are a hive activity for most of the year. For most travellers coming to Tanzania, these two natural wonders take first and second place on an itinerary. If the crowds are too overwhelming and your escape not quite tranquil enough, then why not consider some of Tanzania’s other national parks and game reserves, located in the south of the country.

We’ll forgive you if you’ve never heard of Ruaha National Park, it’s one of Africa’s best kept safari secrets. Located a meagre three hours from Tanzania’s national capital Dodoma, with the distinct Ruaha River running through it, Ruaha is Tanzania’s largest national park. The Serengeti is only 14,750 km2 compared to Ruaha’s 20,226 km2 of untamed woodland, grassland and dusty savannah. Ruaha may not have millions of wildebeest roaming from corner to corner of its park borders, but it makes up for this in other areas.

Ever since Ruaha was declared a NP in 1964, it’s been famous for its number of lions. In fact, Ruaha, at one point, comprised of 10% of Africa’s remaining lion population and is one of only six lion populations in the world, numbering over 1,000 individuals. Next to its lion population, Ruaha has provided a haven for around 200 cheetahs as well as the mysterious and enigmatic wild dog. Wild dog should deservedly have a spot next to Africa’s Big Five, because the opportunity to see them rarely presents itself and when it does, there’s a high chance it will end up being the highlight of your safari.

Ruaha owes a lot of its biodiversity due to the intersection of Africa’s eastern and southern flora and fauna ranges. Not to mention the Ruaha River that runs through the park providing much needed water for wildlife. The Udzungwa Mountains have a hand in supplying this water by breaking up rain clouds that travel inward from the Indian Ocean, which spill over into the park. Notable species include the greater male and female kudu (where their cryptic colouring makes them difficult to see in dense thicket), Sable and Roan antelope, eland (the largest antelope, weighing up to 800 kg), hartebeest (called kongoni in Swahili), Cape buffalo, Grant’s gazelle and waterbuck.

Selous Game Reserve is one of the largest wildlife reserves in the world. At a size of 54,600 km2 it is larger than Switzerland and cover’s 6% of Tanzania’s land mass. For a reserve so vast, Selous remains relatively immaculate and untouched (it was even declared a World Heritage Site in 1982). Although a lot of the reserve has been privately set aside for game hunting (which is an important part of the reserve’s revenue), a lot of photographic and game viewing tourists flock to Selous each year.

The variety of vegetation zones within Selous Game Reserve contribute greatly to wildlife diversity. Vegetation zones range from forests and dense thickets, to open wooded grassland and riverine swamps. A large part of the reserve is drained by the Rufiji River and below the Rufiji-Ruaha confluence are a stretch of lakes and swamps. There are few places in Tanzania, or east Africa for that matter, where you will see such a variety of landscapes in one place.

The northern and north-east corners of Selous offer some of the best game viewing in the reserve. This is mostly due to the fact that these areas contain all three types of habitats. Grassland supports species such as wildebeest and zebra. In the miombo woodlands covering the mountains and ridges around Stiegler’s Gorge, visitors may see Greater kudu and Roosevelt’s sable. In the riverine thicket you will find elephants, hippopotamus, antelope and crocodiles.

Mikumi National Park is the access point for the southern Tanzania tourist circuit and is directly adjacent to Selous Game Reserve (located on Mikumi’s southern border). Mikumi provides a great safari option for travellers entering Dar es Salaam which is roughly three hours away. Wildlife sightings are guaranteed almost year-round and it’s a great safari option for travellers who don’t have a lot of time in Tanzania.

Of all the Tanzanian parks, Mikumi is the most visited. It is also adjacent the main highway to Zambia, meaning many people pass through the park by train, bus, truck or car. Given the amount of traffic, wild animals are inevitably killed on the railway and road.

Not a Quiet Escape, but You Won’t be Disappointed

Compared to the rest of Tanzania’s national parks, Mikumi is the easiest to access. This makes it a great option for many travellers who want to experience a Tanzania safari. Ease of access means you will have to compete with the crowds, but it’s well worth the effort.

Mikumi is distinguished by its impressive Marula trees (Mng’ongo in Swahili). This tree grows up to 15 m high with a thick trunk and long branches, where the leaves crowd towards the end of the branch. Elephants can be seen eating the Marula fruit and it is regarded as a treat for them. Next to the impressive Marula trees, the main feature of the park is the Mikumi floodplain. Open grasslands dominate this floodplain, which eventually merge with the miombo woodland that cover the lower hills.

The smallest national park on our list (covering only 1,900 km2) is far removed from Tanzania’s sunlit plains and golden savannahs. Udzungwa Mountains NP is made up of a mixture of tropical rainforest with miombo woodland and grasslands. It forms part of the Eastern Arc Mountains (which is referred to as the ‘Galapagos of Africa’). Interestingly, when an area-specific guide was set to be published on the national park in 1999, a well-known bookshop in Dar es Salaam decided not to put the book on sale. The owner of the bookshop, her husband and two friends planned to spend the New Year camping in the park and they did not want to be disturbed by other visitors.

Udzungwa Mountains is not really big game country, but that’s part of its allure. There are no roads that crisscross this NP and it is only accessible on foot. Hiking and trekking in the park varies in difficulty, from the one hour Sonjo trek to the extremely challenging 6-day camping trek on the Lumemo Trail. A lot of visitors opt for the Sanje Waterfalls trek which takes roughly four hours to complete and allows you to see the stunning 170 m waterfall. Taking a dip in the waterfall’s plunge pool is a welcome relief after the humid and demanding trek.

The tropical conditions of Udzungwa, not to mention its forests which have been ecologically stable for thousands of years, make it a unique enclave in Tanzania for bird watchers to explore. The NP contains a far higher density of specific rare birds, including the Dappled mountain robin, White-chested alethe, Sharp’s akalat and Olive-flanked ground robin. There are also species of birds found in Udzungwa that were thought to only have been endemic to other countries.

Katavi is perhaps Tanzania’s most remote NP. Located to the east-south-east of the country, adjacent Lake Tanganyika and not far from the border of Zambia, very few visitors make the difficult journey to this NP. If you do take the time, and have the money, to visit Katavi you won’t be disappointed.

Remote as it Gets

The remoteness and lack of access via roads outside the park has helped Katavi’s wildlife and plant life to flourish. Katavi NP lies in a basin of the Great Rift Valley, with the Lyamba la Mpipa escarpment to the west and the Mlele escarpment in the east. The crowning feature of Katavi is Lake Rukwa. The catchment area for this lake is over 85,000 km2 which means the lake is prone to periods of flooding. This floods grazing areas surrounding the lake forcing a lot of wildlife to find other grazing areas.

Katavi Plains has four principle types of vegetation; in ascending order these are: grasslands (mbugas), mixed thickets, open woodland and miombo proper – there are also pockets of riverine thicket and forests. Buffalo are the most numerous species followed by zebra, hippopotamus, waterbuck and impala (other notable species include the Puku antelope, black Sable antelope and Roan antelope). Katavi is great for watching lion-buffalo interactions and spotted hyena can frequently be seen. Leopard appear on the fringes of the woodlands but are not easy to spot. Wild dog also stick to the woodlands but are mostly found on the escarpment and are rarely seen on the plains.

About 450 bird species have been found in Katavi. Species include open-billed and saddlebilled storks, spoonbills, crested cranes and pink-backed pelicans. Raptors are plentiful whilst the woodlands are home to species as diverse as African golden orioles, paradise fly-catchers and pennant-winged nightjars.

Countless pictures of the Serengeti and Ngorongoro Crater have graced Tanzania travel guides and itineraries, but there is a whole other side of Tanzania to explore. If you have the time and a few days to add to your itinerary, then you won’t be disappointed with what the southern Tanzania safari circuit has to offer. 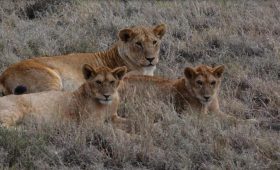